Acid reflux refers to the condition in which the partially digested food containing digestive juices travels back into the esophagus from the mouth. 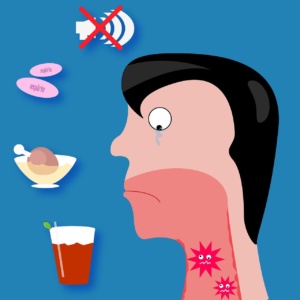 To describe the mechanical layout of this disease, our digestive system has a circular band of muscle called lower esophageal sphincter. This muscle splits the stomach from the esophagus. When the food enters the stomach, this muscle closes so as to prevent the partially digested materials from traveling back into the esophagus. But when the lower esophageal sphincter is rendered incompetent, the stomach contents are allowed to regurgitate or spit up.
The stomach contents that moves back to the esophagus contains digestive acids since they have undergone digestion in the stomach where digestive liquids are released to facilitate the digestion. Because of the acidic nature of the refluxed materials, inflammation develops in the lining of the throat; thus a sore throat is one of the most common symptoms of this condition.
Sore throat is usually associated with other symptoms, though sometimes it is uncommon, such as the occurrence of pus on the tonsil surface and drooling or frequent spitting. Moreover, a patient with a sore throat may also experience difficulty in breathing caused by the narrowing of the air passage through the larynx or pharynx.
The pain or other difficulties caused by sore throat can be abated, if not treated, with simple self-treatments that can be done at home. Gargling is a recommended practice. You may try gargling with warm water mixed with table salt. Drinking a lot of water is also very important.
Get extra sleep, for this encourages faster recovery. Popsicles or cold drinks are good for sore throats. Humidifiers or vaporizers can be used to sooth the pain in the throat. And also, sucking on solid candies, which help promote saliva production, works as an alternative remedy. It is known that saliva contains bicarbonates that help neutralize the acids that might have remained in the throat due to the reflux.
But if home-treatments are not enough to ease your condition with the sore throat, medical treatments are available. The intake of medicine is particularly advised for those who experience associated symptoms like difficulty in breathing, dehydration or body water loss, and severe pains.
Take antibiotics if you feel that viral or bacterial infections have further developed in the throat. Also, rheumatic fever can be prevented from arising, though this condition is very much uncommon. Corticosteroids, which have an anti-inflammatory effect, can help in case of critical sore throat conditions.
Preventive measures and remedies, of course, are available to minimize the incidence of acid reflux, and sore throat, as well.  One practical and immediate treatment is the application of gravity; that is, the person is kept in an upright position at most times so to hold the digested materials down. Gravity can help prevent regurgitation, or the traveling of the stomach contents back up to the esophagus.
Eating habits should also be changed to facilitate the treatment of acid reflux. Usual cases of acid reflux usually take place after a meal. It is recommended that evening meals should be taken earlier and in smaller quantities. This is so that the stomach can get emptied in a shorter period of time as compared to when heavy meals are eaten. Moreover, patients with acid reflux have fewer chances of regurgitating when they lie down.
Medications are also available. Some drugs act to neutralize the acids in the stomach and some work by blocking the production of acids by controlling the actions of histamine.